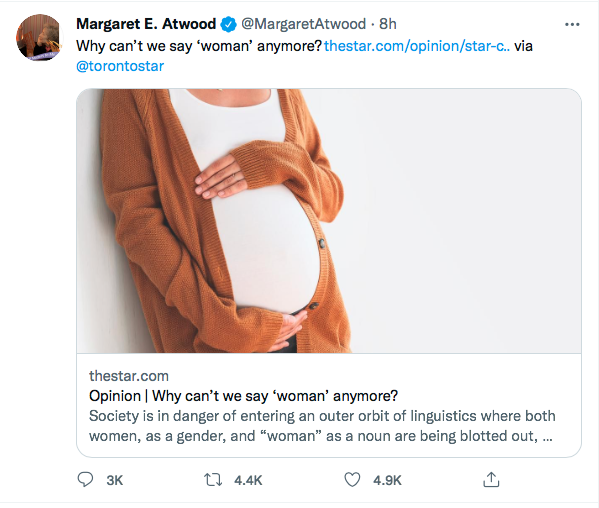 This article is written about women, but it could also apply to men and male only services.

As many readers will already know, the Equality Act 2010 provides for single sex services, and acknowledges that there will be times when it is reasonable for a service to exclude members of the opposite sex (para 27 Schedule 3) or to exclude on the basis of gender reassignment (para 28 Schedule 3). Evidently, it is not likely to be reasonable when someone is running a greengrocers, but it might well be when they are running a refuge or rape crisis centre and need to retain a recovery space that is female only, for example.

Today, the word “terfs” is trending on Twitter. This seems to have been prompted by a combination of factors, one of which is Margaret Atwood’s retweet of an article deemed unacceptable by the self-appointed terf-finder generals. At the time of writing, Atwood has not yet recanted, but did tweet “Read her piece, she’s not a terf” for which she was met with a barrage of comments insisting that the article did indeed bear the devil’s mark of terfery.

The “not a terf” comment made me wonder: what IS a terf? Is the existing law a terf? And I think it reduces to these two key questions:

Answering yes to one or both of these questions is in line with the existing law in the UK, which provides that single sex spaces are legal and that exclusion is justified where ‘a proportionate means of achieving a legitimate aim’ – and what is proportionate for someone who has decided in their own mind but not yet taken any physical steps at all towards transition, may not be the same as what is proportionate for someone who has socially and medically transitioned years ago.

Yet watching the terfs hashtag on Twitter, it seems that for the purists, the only available answer to either question is no. If you answer yes to either of them, then welcome to the coven – you may be horrified to learn it, but you too are among the terven. The only distance between us is which services should be restricted and how far along in transition a person should be to access them.

For those who do, honestly, take the position that the answer to both questions must be no: you are advocating the abolition of single sex or separate sex services altogether, and therefore the abolition of some of the protections available on the basis of sex contained in the Equality Act. Anyone who wishes to advance such an extreme position must be able to formulate a cohesive argument in favour of this drastic legal change. “Shut the fuck up, terf” is not one.